Most enterprises have already implemented Agile methodologies to speed up their software deliveries. As a testimonial to its usefulness, enterprises embrace Agile not only for development but for other functions such as IT and operations to streamline processes, improve feedback, and accelerate innovation.

Taking Agile to the next level, organizations see DevOps as Agile version 2.0. DevOps has now led to Continuous Integration and Continuous Delivery (CI/CD). While Agile helped to streamline and automate the entire software delivery lifecycle, CI checks the code often, and the tested chunks are integrated, sometimes several times in a single day, to create a stream of smaller and frequent releases through CD. Kurt Bittner, a principal analyst at Forrester Research, puts it succinctly: ”If agile was the opening act, continuous delivery is the headliner.”

To ensure CI/CD works well, the not-so-talked-about link is Continuous Testing (CT) which has emerged as the catalyst for enabling quality and speed. With its Shift-Left approach, CT has been a central force to enable CI/CD practices.

Digital disruptors and customer-obsessed organizations are improving customer experience (CX) by shortening their software delivery cycles, delivering features in smaller increments, and scaling their existing Agile processes in concert with DevOps. Traditional testing services don’t cut it for these organizations: 20 of 25 reference customers told us that they are adopting continuous testing (CT) services to support their Agile and DevOps initiatives within a digital transformation journey. Of those CT services, clients say automation is the most impactful and differentiating for delivering better software faster.
The Forrester Wave™: Global Continuous Testing Service Providers, Q1 2019

What is continuous testing?

CT requires tools, teams, individuals, and services. Even if CI and CD ensure faster time to market in the absence of a thorough end-user experience testing, the solution may become a liability rather than an advantage. CT, as the nucleus, is essential to ensure that all things endless, continue flawlessly. To ensure that continuous testing does not impede the pace of CI/CD, test automation is required. 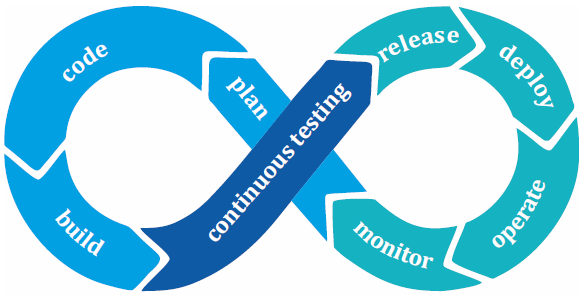 Automated testing is key to the successful integration of quality assurance into DevOps workflows. It is the only way to ensure that quality assurance is as continuous, agile, and reliable as the rest of the operation. CT involves automating the tests and running these automated tests early and often, along with service virtualization to set up all the required infrastructure. Automated testing must be integrated at the initial stages of the development cycle to ensure CT.

In this sense, automated testing serves as the glue that binds together all of the other processes that comprise the continuous delivery pipeline. Without automated testing, DevOps doesn’t work. The World Quality Report emphasizes the need to increase test automation. To deliver software at speed requires smart automation and intelligence. This will help to validate continuously changing scenarios.

Why automated testing is essential for CI/CD

How to identify tests for automation?

It is impossible to automate 100% of tests - manual testing might be more appropriate, in some instances. To have a tester, manually test something that can be automated is a waste of tester’s potential. A broad rule of thumb will be to automate all those tests that are executed frequently. These tests, when running manually, can be prone to errors, based on the fact that the human brain can become weary of seeing the tests multiple times in a day. For example, cross-browser compatibility testing is one function which can be easily automated. Ensure all your automated tests are reliable and do not generate false positives - due to uncontrolled starting state or environment variations, etc.

The second rule would be to automate all those tests that are dependent on a person. Dependency on developers and testers is risky if the concerned personnel are not available during a crucial phase. A testers absence will affect the entire CT process.

Keeping in mind the more significant, long term benefits of automation will build the criteria around which tests need to be automated.

It is better to start with a small set of reliable, automated tests and add to them over time, instead of starting with many unreliable automated tests.

Performance testing ensures that the application will perform well and help the business to meet its goals. By looking at loads, it helps to measure response times, memory utilization, and similar system metrics. Failure to identify performance issues can lead to reduced response time and may even lead to the application failing at crucial, peak load periods. Automating load and performance testing requires planning the performance testing process, i.e., what needs to be tested, how often, etc. When goals are set with metric thresholds, test scripts are created, and finally, these are integrated with the CI tools. Similarly, non-functional testing requirements such as resilience testing, security testing, operational acceptance testing, disaster recovery testing, and scalability testing can be automated. Automating non-functional activities requires a high level of expertise to draw parallels from simulated scenarios, providing the metrics for measuring these and finally for writing the scripts which can perform these tests automatically.

Reinforced by active partners such as Borland (Microfocus), is aligned with today’s business environment with the ability to provide cost benefits, performance, and agility.

Speed or quality, CT, CI, and CD have emerged as catalysts for enabling quality at rate. All the three are dependent on superior testing to ensure frequent releases which are bug-free. test automation helps Continuous Testing to be agile, empowering, and business aligned.